In 1998 while studying towards a Certificate in Business Computing we were asked to build a website about ourselves. Our websites were hosted on a Linux web server located onsite at Southland Polytechnic (now known as SIT). At the end of the course I decided to keep the site I built running and continue to build on the original site I created in 1998.
The name of the website has changed several times from ‘Blair Howden's Homepage’ in 1998 to ‘The World of Blair Howden’ in 1999 and from 2001 to 2019 howden.net.nz after registering the domain name of the same name. Today this website is known as howden.nz.
This site has seen various incarnations over the years and has been developed using WYSIWYG tools, hand coded in HTML, existed as a CMS site and Wiki site, hand coded again in HTML this time with CSS and coded using PHP. This articles looks at how this site has progressed over the years.

My first site was a mixture of pages written in HTML, using the PICO editor on the Linux box my site was hosted on, and some pages were written using Frontpage 98 and uploaded using FTP.

This is the opening page for my first website known simply as Blair Howden’s Homepage. Scrolling down the left frame had links to a few of my favourite sites.

The original site had an email form, this was simple form that emailed from the visitors email client. Clicking on Submit would send the form to my email address.

My original page included ‘Page of the Month’ where you could see my favourite site for the month. I usually picked a site related to something that was going on in the news or online. I ceased the ‘Page of the Month’ page in 2001 when the site became howden.net.nz

At the end of 1998 I gave the site a new look for Christmas 1998 during the month of December. This is the only year I have completely redesigned the whole site for Christmas.

After Christmas 1998 I decided I didn’t want to go back to my old site (having given the site a temporary redesign for Christmas) so I decided to build a new site fresh for 1999. My website was moved from the Linux box at Polytech to homepage space provided by my ISP at the time, Ihug.
After deciding to construct a new site in January 1999 I got to work to build something totally different. I decided to name my new site ‘The World of Blair Howden.’ 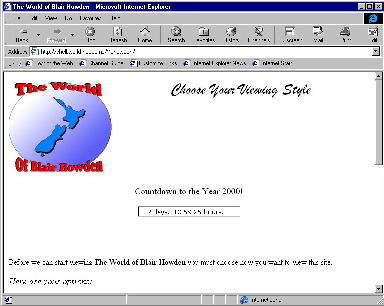 This is the opening page in the second half of 1999 where a countdown timer to the Year 2000 was included. This page allowed you to choose 4 different viewing styles. The viewing styles were "Graphical" which used a Windows 98 style theme, "Classic" which was much like the 1998 site, "No Frames" for those who had Internet Explorer 1 or 2 where there was no support for frames, "Text" for thoese who used a text based browser.

This is 'The World of Blair Howden' shown in the Graphical Mode. The site used a Windows 98 style theme where all links looked like icons.

This was the Classic Mode where my website could be viewed in a similar way to my original site. Links to other sites were available like on the original site and you could even log into your Hotmail account.

I wanted to make sure everyone could view my site so users with a browser that didn’t support frames were catered for. Frames websites were quite common in the late nineties and back then some users were using Internet Explorer 1 or 2 which did not support frames.

I even catered for users of text based browsers such as Lynx.

I decided to create a page about my experience with computers, this page showed a timeline of how I grew up learning about computers. Some of these pages can still be found on this website.

The World of Blair Howden in it's original form only lasted a year after I decided to give the site another redesign. Don't ask me what I was thinking when I decided to put Australia and New Zealand on the new logo. I believe I was consider going over to Australia once I finished my course like many other New Zealanders have chosen to do.

This was the new opening page which simply showed the logo and now there were only two viewing options, graphics or no graphics.

Another new year and I once again decided it was time to create a new site. I decided this year to register my own domain, I decided on howden.net.nz as I believe howden.co.nz was already taken. The domain howden.net.nz was registered on the 24th March 2001 and I decided I would name my website as howden.net.nz.

The original howden.net.nz site actually looks less detailed than my previous sites but something I prided myself on with this site is the fact that the whole thing was written using Windows Notepad instead of Frontpage. Also it was a very small and efficient site, the actual site used less than 1MB of disk space. Frames are now gone in place of tables, most of the pages from The World of Blair Howden I moved over to howden.net.nz except for the Top Page of the Month page. The evaluation page was replaced with a Guestbook I wrote in PHP. 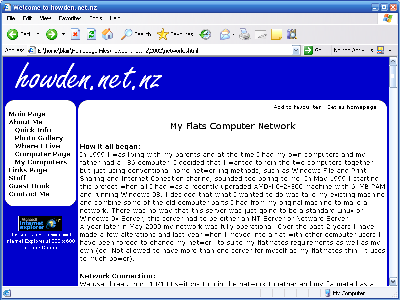 During the middle of the year I gave the existing howden.net.nz a slightly new look but retaining most of the original site. I changed the howden.net.nz logo to something slightly different and this logo is still used today.

This is the 2002 version of howden.net.nz I have now merged the Computer Page and the page About Me into one section and dropped a few of the computer pages that I actually reintroduced in 2003. I also added the Joke Email section that can be found on this site on the menu under Fun Stuff.

This year saw the most significant changes to howden.net.nz. The first change was at the start of the year when I decided that it was no longer worth paying for hosting my website and I was going to completely ditch the whole site until my flatmate at the time, Jeff, suggested I host the site on the Linux box that was running 24/7 in our hallway and always online thanks to our ADSL Internet connection. A few months after shifting my site to our own server Jeff showed me a page he created using phpNuke, this page actually looked like a professionally created website and I decided I would give phpNuke a go.

The menu on the left is a standard phpNuke menu. I renamed the Content item on the menu to About Me and this opened all my pages showing information About Me and my computers. Items in the current menu open up pages in the Content section. In August I moved out of the flat I was living in and as a result I had to host my site elsewhere, this time I opted to host with KiwiWebHost.

After being diagnosed with Cancer at the end of 2004 I made a decision to include a diary of my treatment on my website. While I was going through my treatment my mum was keeping a diary, two diaries actually. One with all the medical details such as what doctors had to say how I was feeling and so on, the other diary was a personal one and my mum was talking at the time of using the information in both diarys to write something from a mothers point of view. While this never happened I got to thinking I should also put together a diary so about 5 months into my treatment one night sitting with the laptop in hospital I started writing a recollection of events as I remember them using the diary mum had been keep to help jog my memory. I figured the best place to publish this diary was on the web and since I already my own site all I needed to do was add the diary into my site.

Around 2007 I found myself using Wikipedia quite often and contributing content to article. I had this idea of converting my website to a Wiki based website which would allow registered users to contribute content to my website the same way the public contribute to Wikipedia. This did open up the risk of my site being vandalised but funny enough I had more issues with my site being hacked when I was using Php Nuke. 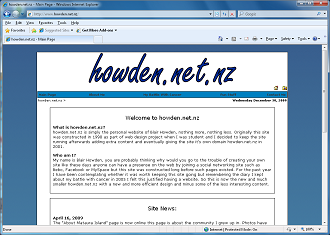 howden.net.nz goes back to basics. At the end of 2008 I decided to scrap the Wiki based site and go back to a hand coded HTML, it had been 10 years since I had written a site in HTML and not being up with the play I coded this site using depricated HTML code and no style sheet. During the middle of 2009 I decided to move the site back to my own server as by now my server was online 24x7, I also added a mail server to my internal server so I wasn't paying for email as well. Also during the second half of 2009 I returned to study and developed my first website for someone else, this website was for the Southern Pride Lions Club and for this website I decided to use PHP. This website contained a login area where other members of the Lions club could login and make changes to content on the pages. This website remained online until 2012 when a newer site was built by another member of the club, the club closed down at the end of 2013. 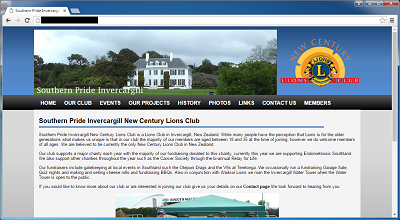 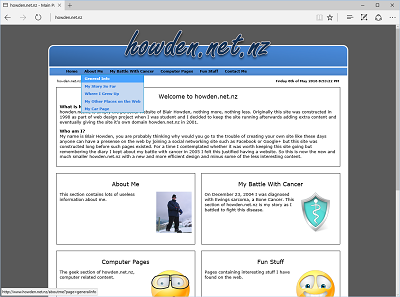 The work done on Southern Pride Lions Clubs website the previous year then prompted me to give howden.net.nz a refreshed look and update the site to use more modern HTML code, Stylesheets and was now written in PHP. The work also was a practice run for the next website I built for someone else, in 2010 for my third year project on my course I developed a website for Wellington radio station Hit Radio X105. The website design was in line with the websites of competiting and included a login area where staff at the radio station could login and make changes to content such as annoucers on the radio station and contained an easy way to include content such as YouTube videos and their PodCast. Unfortunately the website created by myself never went live, the radio station went off the air in September 2010. I still finished the website and was allowed to pass the paper as this was an event out of our our control. 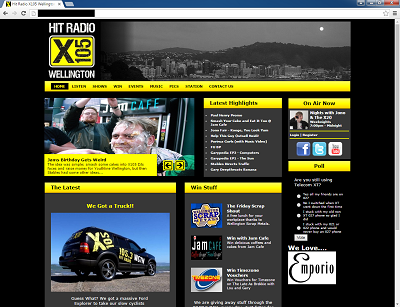 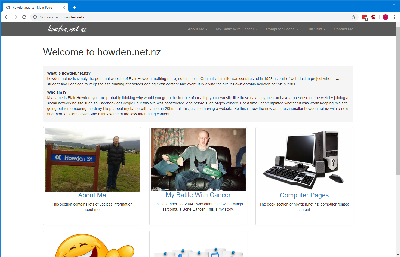 For the next 6 years the look of howden.net.nz remained unchanged, I was happy with the design of this site so saw no need to change it. It wasn't until about 2014 I considered updating the look to follow more recent trends of giving webpages a more flatter look. A work colleague showed me how he was able to quickly design a site using Bootstrap CSS so I decided to replace the exisitng CSS on howden.net.nz to use Bootstrap CSS.

In 2014 top level .nz domains became available, at this point I tried to register howden.nz but couldn't as this domain was in conflict as someone else had registered howden.co.nz. It took until the end of 2017 before that conflict was resolved and I could register howden.nz. In 2019 I decided to rename the site to howden.nz and give the sight a slight refresh.