3 May 2005
I was awoken at 8:30am because the hospital needed me down there now for a blood test since Southland Hospital never sent up the results of the blood test they took a day earlier. I had the blood test taken while mum went down to the admissions office to admit me to hospital. After the blood test mum and I went to a nicer cafè attached to the University part of the Hospital. We then went back to the ward and told the staff we would wait around at Ranui House until the chemo was ready to start. I lay down for the rest of the morning and after getting up I started to feel sick like I was going to vomit. I think this was just anxiety of starting chemo though. At 1:30pm the hospital called and had been expecting us there earlier, a doctor examined me and told me that Professor Robinson wants to go ahead and start chemo today and that tomorrow she would consider dropping the dosage since I kept getting sick. Mum and I sat in our room in the Oncology Ward for 3 hours before chemo actually started. After starting chemo Professor Robinson came in to see us and to answer our questions. She still did not have the results of the MRI scan but the CT scan showed a shrinkage in the scarring found on my lungs done compared to the CT scan done in Invercargill, it is still however hard to tell whether the scar on my lungs in cancerous or not. As for the lump there has definitely been some shrinkage since it was last examined but Professor Robinson believes it should be smaller by now and won't be able to tell how much shrinkage there has been until the MRI has been viewed. It is hopeful that what remains inside the tumour is blood vessels and that there is more than 90% kill of the cancerous cells.
The chemo drugs finished late at around 8:30 before the bags of fluid were put up. I went to bed quite early at 9pm since I was so tired. I have decided to start taking evening showers while on chemo since this will relax me before going to bed instead of wearing myself out in the morning.

4 May 2005
Day two of chemo and I was awoken early by the inconsiderate male nurse so that he could take my bloods and check my temperature, pulse and blood pressure. He then sped up the pump on the bags of fluids so that he could start the next days chemo early. I managed a bit of a rest and lie down after this until lunch time. When the nurse came in to start chemo I asked if he could give me 5 minutes to get dressed and go to the toilet while he was getting prepared but he didn't want to do this because it will hold up getting the chemo started, never mind the fact we started the day before at 4:30pm after mum and I had waited 3 hours to start. I spent the afternoon just reading a magazine and resting. In the evening I had one of the nurses come in and tell me she is transferring to Southland Hospital and will be working on the medical ward so I will probably see her if I end up there later in my treatment.

5 May 2005
Day three of chemo and once again I was awoken early by the male nurse and this time he wanted chemo to start as early as 10am. I spent the afternoon just resting on the bed. In the evening I found my legs started aching so around 9pm I decided to just go to sleep but I couldn't exactly get to sleep when I had the nurse popping in and out of the room all night. At 11 she had to turn on the light and give a demonstration to all the night nurses on how to use the pump while I was trying to sleep. At around 2am I woke up again and started to feel shivery when I told the nurse she checked my temperature to find 38.6. This is the last thing I needed as there was no way I wanted to spend any longer in the ward. At around 4am I finally had someone come and do a blood test to find out what was wrong.

6 May 2005
In the morning my temperature had dropped below 38 and at around 10am I was taken away for an x-ray so a cause of the high temperature could be found. I spent the morning worrying as to how long I would have to stay in the hospital, I just wanted out of Christchurch Hospital I cannot eat there and this would make it harder for me to get better. There were talks of having me sent back to Invercargill by helicopter as flying home on a commercial plane may not be a safe option. In the afternoon my appointment with the surgeon Dr Beadle still went ahead, we waited for over an hour in the consultation room before Dr Beadle came to see me. I was given a surgery date for either the 31st of May at Christchurch Hospital or the 9th of June at Burwood Hospital in Christchurch. I would have rather gone to Burwood as it would be a different hospital but this would only be the case if my white blood cells were not up to a safe level to have surgery on the earlier date. I was then told what the surgery would involve, my entire collar bone will be removed and function in my right arm will be limited, like I will not be able to raise the arm to full height anymore and may not be able to perform some tasks like heavy lifting. I was told the surgery may involve having skin grafts taken from my leg and placed over the site where the tumour is. All of the news come as great shock to me and certainly left me worried over the next few weeks. After the consultation with Dr Beadle I was taken back to the ward where a doctor eventually assessed me and told me I was allowed to go back to Ranui House for the night and come back in the morning but if my temperature went above 38 I had to go back to the hospital. Back at Ranui I had McDonalds for tea, as I always needed something small for my first meal after chemo. I felt fine all evening but when it came to bed time I checked my temperature to find it exactly 38, there was no way I wanted to go back to the ward for the night so I took a paracetamol tablet and waited 30 minutes in the hope the temperature would be down. No such luck so then I tried checking my temperature by putting the thermometer under my arm instead of my mouth and managed to get a reading of 37.9 and then I decided it was under 38 and just to risk it as there was no way I wanted to go back to the hospital and it wasn't like I was neutropenic at this stage. Mum was a bit worried about me doing this and told me that if my temperature did rise over night or I started to feel unwell I would have to go back to the hospital.

7 May 2005
I woke up around 6 in the morning, this was the best sleep I had ever had the day after chemo and was unable to get back to sleep until just before 8:30 when mum came in and woke me up as it was time for us to go back to the hospital. A quick of the temperature again and this time it was 37.4 so hopefully it would stay down at least until we left Christchurch. We ended up spending an hour at the hospital before a doctor saw me and discharged me. I was told if my temperature goes above 38 once back in Invercargill I must once again go to hospital.
After eating a packet of potato chips for breakfast at the hospital cafe, since that was all I felt like, mum and I went back to Ranui until around 1pm when the taxi came to pick us up and go to the airport.
Once I was home I spent the evening just watching TV and I kept an eye on my temperature to make sure I didn't end up again in hospital, my temperature stayed below 37 for all the evening, I believe the oral antibiotics I was put on may have helped this.

9 - 15 May 2005
Over the week I recovered as usual from chemo and this time for the whole week my temperature stayed below 37 so no stay in hospital for me this time round.

16 May 2005
The district nurse came round and did a blood test to see if I was still neutropenic as I hadn't been in hospital and had any tests done to check. The following day the results came back from the blood test, I was no longer neutropenic so I had some of my mums baking simply because it was safe to do so.

18 - 22 May 2005
My younger sister Neroli and her partner Paul came down from Auckland and spent the next few days with us. Over the next few days it was like I was able to do more normal things and this made me feel heaps better. Katrina also came down on the Friday night so for once the whole family was home. Katrina, Neroli and Paul all had a few drinks, I had to settle for Lemonade and Ginger Beer since it is not possible to drink while doing this sort of treatment. 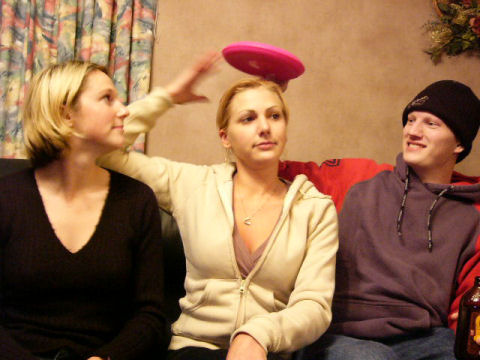 Katrina, Neroli and myself at home. The beanie I am wearing is what I wore most of the time now when I was out of bed. The pink disc I am trying to put on Neroli's head is a heat pad that I often placed on my stomach or back when I was in pain, it is actually intended for pets to place under their bed but worked fine for me.

23 - 28 May 2005
The next few days I didn't really get up to much but I felt as if I had been feeling the best I have been in a long time, I have been a bit worried about the operation even thinking about what if I didn't wake up after the operation but I managed to assure myself that wouldn't happen.