23 December 2004
The day started out with me going into WINZ to hand in my application forms for a sickness benefit. Missing from the forms was the information from the doctor as at this point I was still awaiting my appointment to see the doctor. As I didn't have this information I was sent away, I explained that I wouldn't see the doctor until 2 o'clock today and the WINZ staff weren't interested as they only take applications between 8 and 10 in the morning and I was told with the lack of information I have I should just be applying for the dole. I thought this comment was inappropriate as I have a job I am not unemployed, I just have been told I can't work at the moment.
I went home and started to prepare our flat Christmas party that we decided to have that night. I drove down to the supermarket and bought all our groceries to make a special tea that I intended to cook after getting back from seeing Doctor Fosbender. When I arrived home just before 2PM Aimee told me the hospital had called and Doctor Fosbender wanted my parents to attend my appointment. I called mum and she got down to the hospital as quickly as she could, I drove down there in my car separately. Dad was working out near Winton and tried to get to Invercargill as soon as possible.
Doctor Fosbender arrived and we then walked into his office. Doctor Fosbender's first words were "I am afraid this is not good news." He told me I have "Ewings Sarcoma" which is bone cancer I was told that I would not survive if this was left any longer and that I must have chemotherapy to try and shrink the tumour and possibly radiotherapy. I have been given a 70% chance of survival provided I have treatment; 20 years earlier this sort of disease only had a 15% chance of survival. Next I was told that my surgery will be done by a Doctor Beadle at Christchurch Hospital as he is one of the best surgeons in the country who specialises in Ewings Sarcoma. I was told Christmas doesn't usually wait for this sort of thing and they would probably give us a call in the next 24 hours to begin straight away putting aside the fact it was 2 days before Christmas. The doctor filled his section of my application for a sickness benefit and it really hit home when he ticked the box marked "cancer" as my reason for being sick. He then wrote me a medical certificate stating I would be unable to work for 3 - 6 months this also hit hard as now I knew I would not return this season to the freezing works. The doctor then left mum and I in his room giving us time to talk about this, both of us just sat there silent. My mother then said at least we know now the treatment would be in Christchurch and not Auckland as we a large amount of family up there. I couldn't say much and ended breaking down into tears. I didn't feel up to driving home so mum decided to take me home and have dad pick up my car later. While leaving the hospital we spotted dad and flagged him down, I let mum tell dad as I knew I just couldn't say what was wrong without breaking down again, my dad was just speechless the only thing he could really say was "oh shit."
The worst came when mum dropped me off at my flat, Aimee was home and I just looked at her and she asked what was wrong. I couldn't say a word my mother just wept out the words "it's malignant." It was then Aimee gave me a friendly hug and what made a bad moment seem so much happier was when Beni, Aimee's brother came over and started hugging my legs. For Beni he was too young to understand what was wrong.
Later that day my parents took me to work so I could explain to my boss that I would be off work for the next six months, my boss told me that I would not loose my job and any seniority mainly because I had a good attendance last season and worked all off season so this appeared to be real genuine case.
Our flat Christmas party still went ahead Matt came home from work as soon as he heard the news and instead of having a big flat Christmas dinner we ended up having Pizzas for tea, opening presents we bought for each other, watching a few DVDs and having a few drinks. The drinking helped me take away the worries and I managed to get off to sleep fine that night.

24 December 2004
I handed in the forms to WINZ and the staff almost seemed ready to send me off again but after my mother backed me up and said that we need to be at the hospital at 9AM they took the forms right away and gave me a 3 o'clock appointment of course we had to explain that we may not be in Invercargill at 3 since we thought we would be sent to Christchurch immediately. At 9AM I had my stitches removed from the lump at the hospital. When I returned home I had a phone call from the hospital travel agent explaining that we would not travel to Christchurch until the 4th of January. The delay until the New Year meant that I could spend Christmas and New Years at home, this would be my last week of freedom. I had my appointment in the afternoon with WINZ and when producing my Drivers Licence for id I realised it had expired so on the way home I went into the AA to have my licence renewed. I got to thinking had I realised further down the track my licence photo may have been me with no hair.

25 December 2004
Our family managed to celebrate a rather normal and unaffected Christmas. Christmas was a rather quiet Christmas with just Auntie Eunice, Uncle Stephen and my cousin Sarah down from Christchurch.

New Years 2004 - 2005
I was just pleased that I managed to spend New Year's with my friends instead of being in hospital. Our original plans to go to Lake Mavora were changed due to bad weather and we all went to Queenstown instead on the 2nd of January for the day. New Year's Eve we spent at home all together and later that night we all went clubbing. 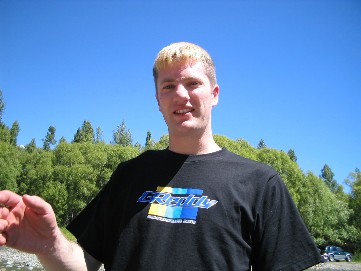 This is me two weeks before treatment began and one of the last photos of me with hair. 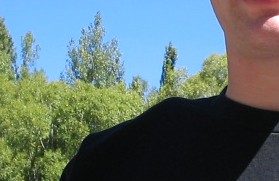 This is the same image zoomed in to show my shoulder, as you can see the lump was quite visible when I had a TShirt on