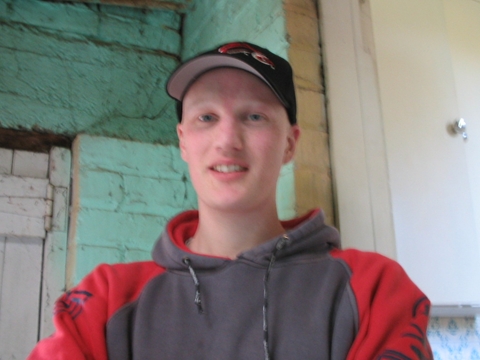 Me in the garage at Matt and Aimee's new flat (that they were moving out of that day). Now with the warmer weather I am always wearing a cap instead of a beanie even if it does make it look more obvious I have no hair.

14 November 2005
I had my appointment in Oncology with Doctor Bayston in the afternoon. We discussed travel arrangements and accommodation for the Sarcoma Clinic in Christchurch, which will take place on the 25th of November. The Ministry of Health usually expects patients to travel to the appointment and return on the same which would mean I would have to leave Invercargill early in the morning and return in the evening. Due to the fact the appointment will take place only a week after chemo I will be allowed to fly up to Christchurch the night before and stay in accommodation provided by the Ministry of Health, this is thanks to Doctor Bayston writing letter to the Ministry of Health. The Sarcoma Clinic is to discuss whether any further treatment will be necessary.
I will not have any Neupogen after this cycle as this is my last cycle, the reason is that we won't need Neupogen to get my white blood cells high enough to get the next treatment on time, I actually had choice as to whether I wanted to have Neupogen or not. It appears I will be able to have the Hickman Line removed as soon as my white blood cells have recovered after this treatment. As my Hickman Line is being removed I asked whether I could have the plugs on the Hickman line changed to CLCs which means I will only need to have the line flushed once a week instead of twice a day. The reason I haven't been allowed to use CLCs in the past is the risk of damaging the Hickman line but as the line is soon to be removed this was no longer a concern.

16 November 2005
Well it has finally come my very last cycle of chemo starts today. The cycle started out the same as other cycles, I started going downhill once the Ifosfamide was pumped into me. I sent out a mass text to friends letting everyone know that this is it, my very last cycle. My friend Jeff who I lived with back in 2002-03 and was on my course at Polytech around 1999-2000 gave me a phone call today after I sent him a text message I was really surprised to hear from him as I hadn't heard from Jeff since a week after I was diagnosed. During the afternoon I mainly rested and just read the paper and a magazine. When I was transferred to the ward I saw that once again I am lucky enough to be in a single room the downside is that this room didn't have a TV in it. Oncology bought up their spare one but I could only watch TV3 since the TV only had rabbit ears.

17 November 2005
I slept in until it was time to go downstairs to Oncology for my second day of treatment. My nurse was nice enough to not disturb me all morning. Down in Oncology I rested all morning and couldn't get any fluids into me. The entire time I was in Oncology I just lay there all day and really just briefly read the paper. My nurse commented that it looked as if I hadn't moved all day. I ended up vomiting 4 times while I in Oncology. In the evening I just lay and watched TV in my room up in the ward, I actually dozed off for a while watching TV around 7pm, but woke up before mum and dad came in to visit. I stayed up until just after 11:30 when the next bag of Mesna was put up. The nurse asked how many Mesna bags I had left to and I was able to work out that this bag was my 135th out of 136 bags of Mesna that have been pumped into since that first cycle of treatment back in January.

18 November 2005
At 6:30am the final bag of Sodium Chloride finished pumping through and I was disconnected from the pump for the very last time. Hopefully I should not need to be connected to an IV pump ever again. For the next hour or so I just lay there thinking how this ordeal was hopefully now all but over. At this time I had a very fitting song in my head, "The End" by "The Doors". I ended up going back to sleep and slept for the rest of the morning until I was discharged and was able to go home just after midday.

25 November 2005
Today is the day of the Sarcoma Clinic at Christchurch Hospital, this clinic is to discuss whether any further treatment is necessary. Mum and I flew up to Christchurch the night before and we stayed in a motel in Christchurch. I woke up around 9 in the morning and decided to get up and vacate the motel now before the 10 o'clock check out time. I was expecting that I would sleep until lunchtime as I have been doing while on treatment and would have to pay extra for a late checkout. Mum and I walked down to the hospital but since the appointment wasn't until 2 we had 4 hours to fill in. We went back to Ward 27 the Oncology Ward at Christchurch Hospital to see all the staff once again. The nurses were certainly pleased to see me again and wished me luck now that treatment has finished. I actually handled walking back into Ward 27 much better than I thought I would as walking in there while I was having treatment just made me feel sick. Mum and I then walked over to Ranui House to see the staff there and stayed for a cup of tea. Katrina and Chris then picked us up at lunchtime and we went out for lunch.
We arrived about 5 minutes late for the clinic and surprisingly enough only had to wait another 5 minutes before the clinic started. Doctor Beadle examined my shoulder area and for the first time noticed a bone sticking out where my arm joins to my shoulder, it appears that a new bone (where the colar bone once was) has now started growing there. Doctor Beadle told me this could be fixed by having the part cut off, I only needed to have this done if I wanted to have it done or if any serious problems arose like the bone growing through the skin.
My biggest concern at this point is whether any further treatment is required I certainly don't want to spend the coming months having radiation and was even planning what I could say to talk the doctors out of radiation taking place. Fortunately I received the good news that no further treatment is needed and this includes any radiation. From here I will have scans every three months to make sure the cancer has not come back. The scans will be CT scans of the chest area as this is the area the cancer is most likely to return to, I was told if the cancer was to spread to the bones I would know as soon as I felt any pain. I have been told not to return to work until about February as I was originally planning and it is best that I work for just a few hours a day until I get used to working again. As far a physical activity goes I have been told to pretty much try any activity but if I start getting pain in the shoulder to stop immediately. The Hickman Line can be removed as soon as my white blood counts have risen high enough due to the risks of infection. This is expected to be in the next two weeks, if no surgeon at Southland Hospital can remove the line I will have the line removed in Christchurch Hospital as this is where the Hickman was originally inserted. The clinic only took about 5 minutes and it appears from here that Southland Hospital will look after my post treatment, both Doctor Bridget Robinson and Doctor Beadle wished me all the best for my recovery and hopefully I will not need to see them again provided the cancer doesn't return.
After returning home from Christchurch there was a phone message for me from the Freezing Works, it appears the next season will start next week. I rang my boss and explained that I will not be fit to return to work until February I will have a meeting with my boss next week to discuss this further.